The Blue Pitbull, also known as the Blue Nose Pitbull (blue nose) are dogs that share their ancestry with bulldogs and terriers. Not many people are aware of the fact that Pitbull was originally formed as a fighting dog and over time, evolved as a companion dog and excellent pets for children.

Blue Nose Pitbull despite its aggressive mode, is an excellent choice for families due to their loyalty to the owners and kindness to strangers. However, if these dogs are not trained they can be very stubborn and difficult to handle. Once trained, an American Pitbull can be obtained to perform many very healthy activities such as participation in trained dog competitions, as well as their use in police rescue.

Many people are curious to know where the name “Pitbull” comes from. The history of pitbulls is interesting. As mentioned earlier, Blue Nose Pitbull was developed due to the breeding between American bulldogs and American pitbull terriers an excellent mix between two breeds made to fight and track all kinds of food.

It was initially developed by butchers, who kept the fierce dogs trained to attack bulls. Over time, it gradually became a popular sport among the masses that enjoy watching these bull dogs “bait”, bears, horses and other animals.

When this sport became an illegal sport, these dogs were used to attack smaller animals like rats. This activity often developed in the wells. ” The role of the pitbulls spread with the immigrants who took these dogs with them when they traveled from England to America. The agility and aggressiveness of this breed became a useful resource for farmers who used them to graze their livestock and protect them from wild animals and other hazards.

The Blue Nose Pitbulls are now considered as faithful companions of human beings and have demonstrated their loyalty as pets at home, police search dogs and also often turned into therapy dogs.

The Blue Nose Pitbulls or Blue Pitbull are medium in size, with a toned and muscular structure. The height of this breed ranges form 46-60 cm and weighs between 14-27 Kg. It’s eyes are shaped like an almond and the ears can be small or medium in length. The nose is grayish, pulling towards a slight bluish. Blue Nose Pitbulls have a thick, short and shiny hair coat, which can vary in color. The lifespan of the Blue Nose Pitbull is about 12 years.

A trained Blue Nose Pitbull is an animal of good character and obedience that shows a high level of affection towards children and deals with a great deal of attention from its owners. Because if your great intelligence is used both as a working dog and as a companion, you can get a lot of benefit. Blue Pitbulls are widely used in rescue operations by police and armed forces in several countries.

This breed is very muscular and in general they are totally healthy dogs, but occasionally it suffers from health problems such as congenital heart disease, cataracts and hip dysplasia. Some breeds that have a lighter colored layer are also prone to suffer from skin allergies. The average lifespan of these dogs is twelve to fourteen years. Pitbulls have few typical health complications are hip-dysplasia, cataracts and allergies of hereditary origin, and susceptibility to parvo viral infection.

The blue pit needs strenuous exercise and you should take long walks every day with him. The different activities that these athletic dogs can commonly perform to keep fit include:

Blue Nose Pit is one of the most popular dog breeds. These dogs are also called as American Staffordshire terrier and American pitbull. All owners of these dogs must have valuable information about them, therefore here are some details of your interest:

In general, these pitbulls are healthy. Blue Nose pitbulls are very dependent on humans. These dogs crave the love and affection of human beings. These animals are definitely smarter than most other dog breeds. Pitbulls in general are trusted animals and go out in nature.

However, the level of confidence can be eroded if these dogs are not trained properly or are able to only put them to peel as the main objective.

Some people do not like Blue nosed pitbulls, due to the aggressive nature. The inexperienced pitbull owners belong to this category.

They often confuse in these dogs excess activity with human aggression. Blue pitbulls resort to destructive chewing if they are frustrated or maintained without proper exercise. Some people are forced to abandon these wonderful dogs if they had to move to an area where pitbull breed is prohibited.

Since many times the bad training or use for other purposes, causes them to repel in some places PitBulls for the few negative points that we have spoken, in many occasions these dogs are forced to live and train in rescue centers.

But Blue pits are not entirely happy in rescue centers, since these dogs love the attention and care from human. But this breed can adjust to the new situation quickly and develop links with new people. The adaptability of the dog depends a lot on the care provided in the rescue center, the temperament of the dog, and the past experience of the dog. 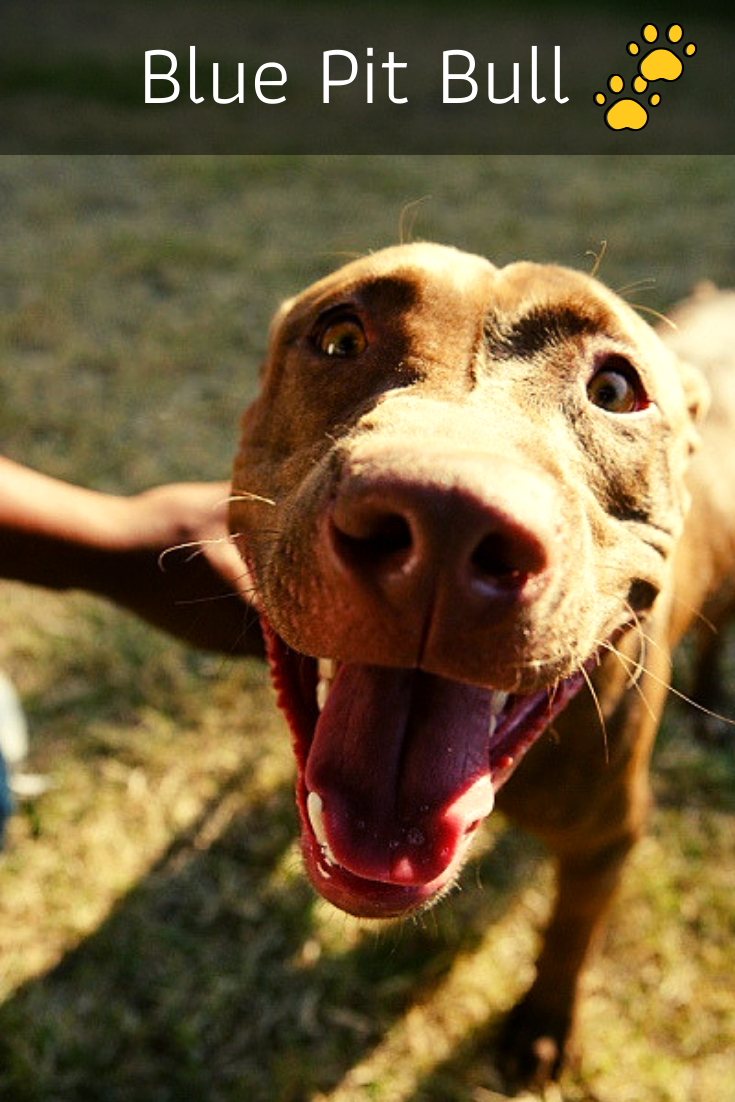 Blue pitbulls love to play with children. But there is a word of caution. As these dogs are full of energy to the brim, they can accidentally hit or push the child. Therefore parents should be close to the play area when children are playing with the dog. This type of accidental blows will be more common if pit bulls are less than two years old.

Blue PitBulls and Other Breeds

These dogs cannot tolerate other dogs since these pit bulls are aggressive dogs, even more so if the dogs with which they are related are of the same sex, therefore if you are going to take your dog to the park with other dogs, you should be very careful and be attentive to a possible attack of your dog to other breeds.

In the puppy stage Blue Pit Bull can be friendly with other breeds, but this does not mean that they will not be aggressive in the future, their genetics are focused on fighting with others of their species, and be kind to humans.

Undoubtedly this is a beautiful breed of dogs that having the right information about their training and special features, makes the Blue Pit Bull the perfect company for your family. If you are getting one or you already got a pit bull puppy you are probably brainstorming a perfect name, you can find some really great tough dog names online that would suit your new dog.

If you liked the article share it on social networks and help inexperienced owners to improve the relationship with their Blue Nose puppy, any questions you can leave it below in the comments.